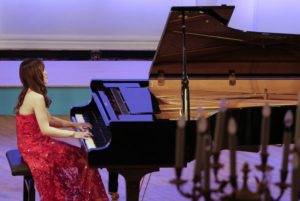 Shino Hidaka started playing the piano at the age of 5.

In 2010, she was awarded two prizes : the third prize at the 7th KAZUSA AKADEMIA MUSIC COMPETITION and an incentive award at the CHOPIN PIANO COMPETITION IN JAPAN.

In August 2010, she took part in RUSSIAN PIANO SCHOOL IN TOKYO as a master class student of Sergei Dorensky, Pavel Nersessian, and Andrei Pisarev.

She graduated from Tokyo University of the Arts in 2011, and was awarded the Douseikai Prize at graduation.

And, in October 2012, she got the 1st prize and Gold Medal at the 5th INTERNATIONAL PIANO COMPETITION IN MEMORY OF EMIL GILELS in Ukraine, Odessa.

At the Gilels Competition, she was awarded the SPECIAL PRIZE «For Best Performance of the Ukrainian Author Vladimir Ptushkin’s Composition “Rhapsody”.

She was SEMIFINALIST. And she got Conservatoire Grand Hall Prize.

In March 2014, she graduated from the Master`s course of graduate school of music at Tokyo University of the Arts.

Currently, she continues her study in Moscow State Tchaikovsky conservatory in the class of Professor Yuri Slesarev.

She was a participant of 15th INTERNATIONAL TCHAIKOVSKY COMPETITION in 2015, and performanced in the Big Hall in Moscow Conservatory.

And in this year 2016, She won the 2nd prize at the 17th SAN JOSE INTERNATIONAL PIANO COMPETITION in America(CA)

Now she has started career as young pianist.

She had solo recitals and concertos with orchestra in Moscow, Olenburg (Russia), Kiev (Ukraine), Berlin(Germany), Odessa(Ukraine)and many cities in the world.